When you hear the words “street art” you most probably snort in derision. This is only natural since street art has often been used to refer to sloppy spray-painted names of street “artists” or stickers with illustrations that could very well be made by a 5-year old. But when you see the pieces we have gathered here, your second thought will be “Now THAT is street art!” That’s your second thought because the first will be “WHOA!” And perhaps your third will be something along the lines of starting a petition to have the sidewalks transported to a real museum. 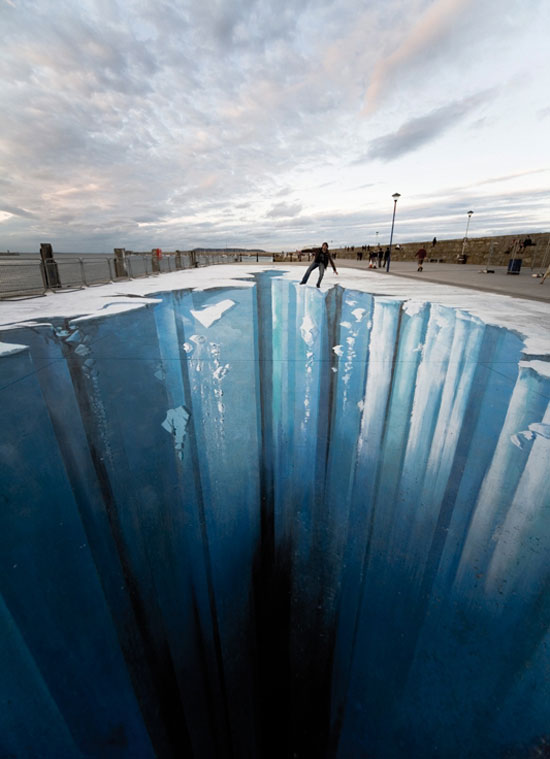 An Ice Age takes a very long time to happen but this astounding work took only 5 days. This was created by 3D street artist extraordinaire Edward Muller. He had 5 assistants with him and they worked all day, rain or shine. The result was truly fantastic, as you can see. This street painting was 250 square meters in size and jaw-dropping in details. Those who saw this in person most likely never dared step into the “deep” part of the painting. 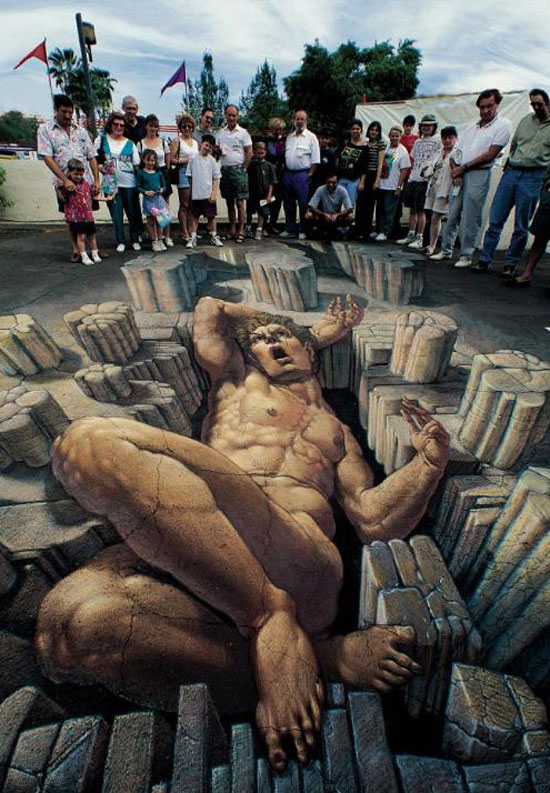 Done by the master of 3D street art himself, Kurt Wenner, this brilliant work of art is something that one will not forget for a long time. Perhaps you might even be impressed by this than a few paintings that you have seen displayed in the Louvre. The Giant looks like he might be relaxing, isn’t he? But considering his facial expression, he might be in pain or about to fall into the abyss. Either way, this classical-style 3D painting is truly fantastic. 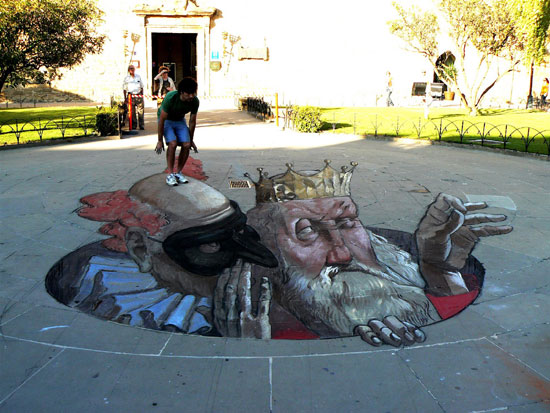 This funny piece is done by the anamorphic street artist, Eduardo Relero. Owing to his training in Architecture, Eduardo creates amazing pieces that have made streets even more interesting. He works primarily on the sidewalks of Spain but he has also made some streets in Italy, Austria, and the Canary Islands his canvas. The great thing about Eduardo’s pieces is that they have a satirical element. They also have the right touch of whimsical, making them truly memorable. 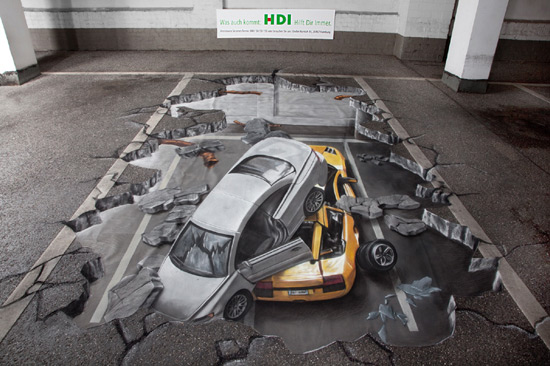 How many times have you parked your car on an upper level of a parking facitity and wonder whether the concrete will hold? Well, this might have never crossed your mind but this action film-inspired street painting commissioned by HDI shows you exactly how it looks like. HDI is an insurance company and this was one of their more clever advertisements. 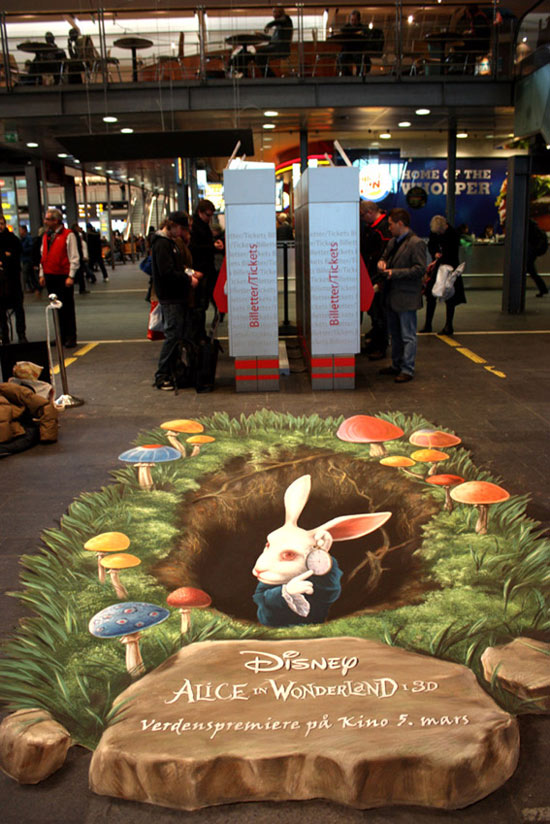 This was done for the premiere of Alice in Wonderland in Norway. The artist is Manfred Stader. Mr. Stader is one of the most sought-after 3D street artists by big companies. He has transformed not only streets but the interiors of shopping malls, parking lots (he did the HDI painting above), groceries, and other places where you would not expect to be astounded by a wonderfully-executed anamorphic painting. Admit it, you want to follow Mr. Rabbit down that hole. 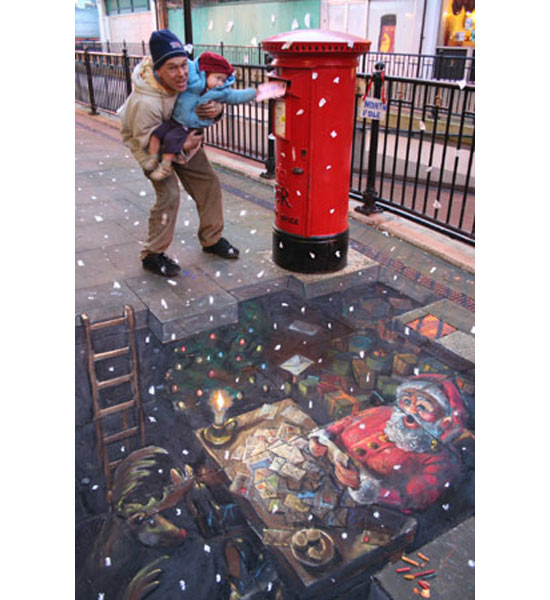 This particularly clever chalk street painting is by the English artist Julian Beever. Some people may say that this removes the element of magic behind Santa but at least you get to avoid the many questions kids tend to ask about this adorable Christmas character. But then you’d be attacked with questions related to the actual residence of Santa. “But doesn’t he live in the North Pole?” 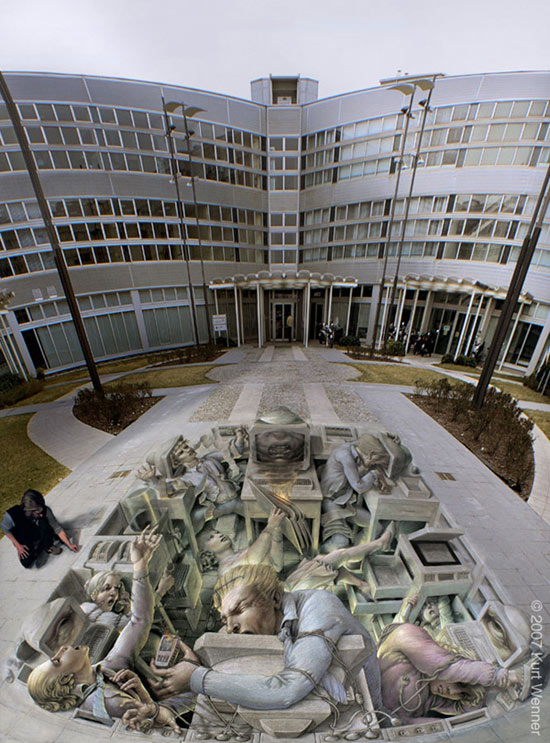 Another by the legend, Kurt Wenner. At first glance, you will wonder what this particular anamorphic painting is about. Then you take in the location, the overall gray tone, and the expressions of the people, and realize that you can relate to it. If you happen to be living the corporate life and aching to be set free, this painting perfectly represents your anguish. Now don’t go ballistic; go out and find a way to relax. Perhaps have an art appreciation day? 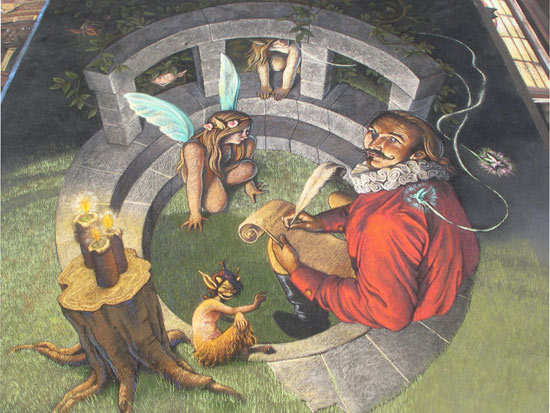 How magical is this? How lucky for the artist, Tracy Lee Stum, to have “witnessed” the bard making progress on his magical play. And look at the fairies being delightfully helpful! The lighting of this 3D street painting is just spectacular. You can’t really expect nothing less than astounding from Tracy Lee Stum. In fact, she holds a Guinness World Record for the largest street painting done by an individual. Impressive! 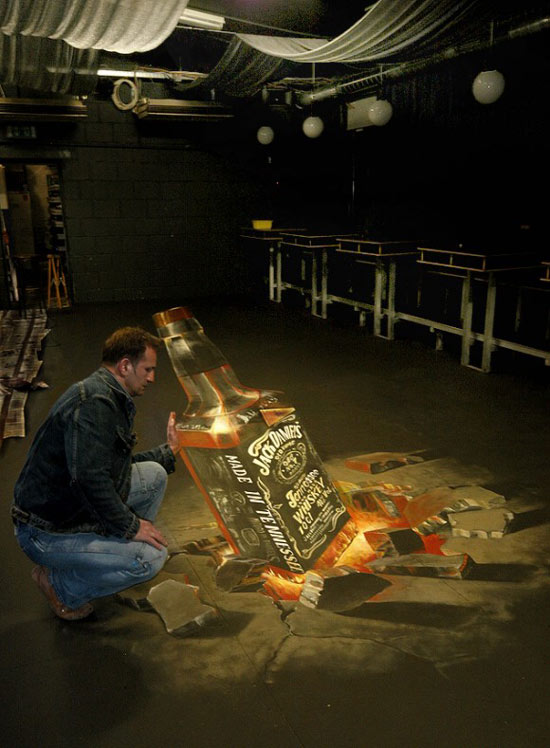 This proves that when you drop a giant bottle of Jack Daniels, it will not break but the ground will. Done by Gregor Wosik, this is one of the few anamorphic street paintings for liquor companies. Jack Daniels did well in choosing Gregor Wosik to do this piece. This Polish artist is one of the most celebrated 3D street painters today. Watch out for more of his works on a sidewalk near you! 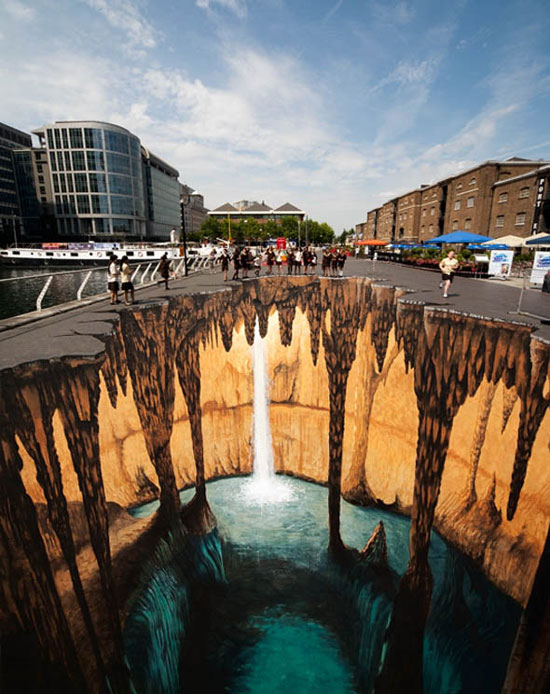 This incredible piece of art was done by Edgar Muller. Combining the elements of mysterious and creepy beautifully, you get a huge 3D street art that is undeniably glorious. It makes you wonder if there really are mysterious caves right under the streets you walk on. Perhaps there are and perhaps, one day, the ground will break and you will experience what it’s like in Edgar Muller’s imagination.